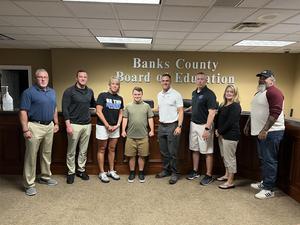 Banks County Board of Education recognized student Taylor Cheek for his outstanding work ethic, determination, effort, and excellence in his pursuit of chasing the Olympic Dream. Each month Banks County Schools participate in themes that encourage characteristics and actions that depict outstanding young people in our Banks County Schools. The September focus is Anything is Possible.

"Taylor not only embodies this theme; he has become that heart of what hard work, determination, and effort can become when one sets their mind to something," stated Mike Brown, Principal at Banks County High School.

Coach Vince Lehotsky stated he is one of the most coachable kids he has ever coached.

Taylor first began competing in Special Olympics State games for the 2019 summer games, held at Emory University, where he won gold in his event. Then, during the 2019 fall state games, he traveled to Valdosta to compete as part of a unified bocce team, leaving with gold.

Covid canceled Special Olympics competitions for 2020 and 2021, but he found success early in 2022 during the winter state games for powerlifting.

He won gold for squat, deadlift, and bench-press. In April, his success at winter state games qualified him to compete in the American Amateur Powerlifting Federation Nationals in Gatlinburg.

It was there that Taylor competed alongside some of the best powerlifters in the nation. Some of those with disabilities, and some not.

Taylor not only placed first for his age and weight but also set national and world records. Not only did he set new records, but he also ended up beating those and replaced them with new records. His win at Nationals qualified him to represent America at the Amateur World Powerlifting Federation World Championships in England. In addition, he qualified to compete as a typical competitor. This invitation was a tremendous honor; Taylor and his parents felt it was best to focus on his upcoming competition at the World Powerlifting Competition this November in Orlando.

Taylor credits his success to many of our faculty and the Banks County community.

He has received tremendous support from his peers and classmates.

Coach Vince Lehotsky has worked with Taylor in the weight room to prepare him for his first-ever powerlifting competition. In the middle school weight room, Taylor developed confidence and a passion for powerlifting. Coach Lehotsky also had to attend training to become a certified Special Olympics powerlifting coach, leading Taylor to the victory that has opened up many doors.

Mr. Jon Williams, the owner of Titanz Fitness, happily agreed to train Taylor pro bono for his competition in Gatlingburg. Under Jon's training and the support of the entire Titanz family, Taylor more than doubled all his lifts, contributing significantly to his current records.

Taylor's long-term goal is to compete in the Special Olympics USA games in 2026. When he was younger, he had a chance encounter with a Special Olympian who also had Down Syndrome, which sparked this goal.   He will be competing at WPC Worlds in Orlando in November. In 2023, he will compete in Special Olympics State Games in Marietta. His success there will determine his opportunities for the rest of 2023, including AAPF Nationals in Illinois, AWPC Worlds in Louisiana, & WPC Worlds in Great Britain.

Currently, Taylor works out three times a week and also at Titanz Fitness. His schedule will become more intense as he draws closer to his competition in November.

The weight training program has played an essential role in Taylor's life. From the weight room to the classroom to the community and outside of Banks County, it is a program where all students can participate, thrive, gain confidence, and be accepted and encouraged.

The BOE also recognized Mrs. Tondra Boswell's dedication to the Special Olympics program and her work with Taylor.

Coach Vince Lehotsky for his time, effort, and encouragement in Taylor's journey.